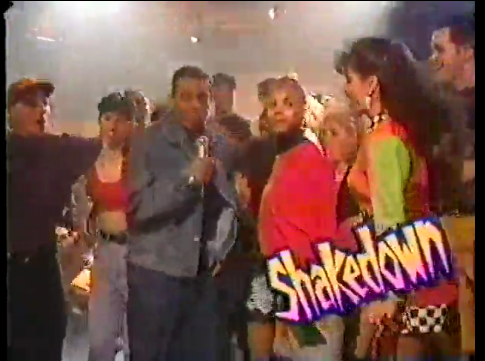 Next up in our highlighting of the WJZ-TV Collection, we feature two shows at the same time. You can’t mention the history of one without the other: “The Buddy Deane Show” was a teen dance show featuring popular music and dance, broadcasting on Channel 13 from 1957-1964. It was created by Zvi Shoubin and based off of the popular show, “American Bandstand”. If it sounds familiar to you, it was the basis for “The Corny Collins Show” in John Waters’ 1988 “Hairspray” feature film. You can see some footage of the show and how successful it was in ratings via this recently digitized WJZ promotional film from 1959.

This concept was brought back by WJZ-TV in 1986 with the show “Shakedown”, which ran for about a year. This first iteration of the show seemed to feature more of local area musicians, with live performances and dancing mixed in. “Shakedown” was then revived in 1992. This second incarnation seemed much more focused on dancing, as well as live DJ-ing. We can’t seem to find when the second iteration of “Shakedown” stopped airing–we will have to update after more research. Check out some camera original footage of “Shakedown” from a famous local club, Odell’s.

Unfortunately not much of “The Buddy Deane Show” has survived in the WJZ-TV Collection, which is pretty typical for early local television as it was shot live and many did not consider it valuable enough to record and save at the time. If it was recorded, then most typically that was to share it on other stations so it was sent away or not kept. Many times old recordings were taped over in the interest of saving money and space, and then thrown away when the station moved on to a new and “better” video format. However there is some footage that remains like the few clips above, as well as several interviews of the cast of “The Buddy Deane Show” which WJZ remembered on air in the 1980s after the success of “Hairspray”.

It looks like what did survive in the collection is more of the first iteration of “Shakedown”, with a few episodes of the beginning of the second iteration. There are U-matic videocassettes and 1″ open reel video, masters and show dubs. We also have found some Shakedown content in the large WJZ series of items that initially were unknown, like the video above shot at Odell’s Nightclub.

We are sharing the inventory of tape labels for this series, but keep in mind these may be inaccurate.

If you would like to watch any of the films and videos in the below inventories that have not yet been digitized, we require the item to be digitized.

Digitization requires a fee based on quantity, condition, and format of the items. Delivery of the digitized files will be via Dropbox link for you to download. Due to limited staffing, digitization and delivery will take several weeks.

View all posts by siobhancarreen

We need your support!